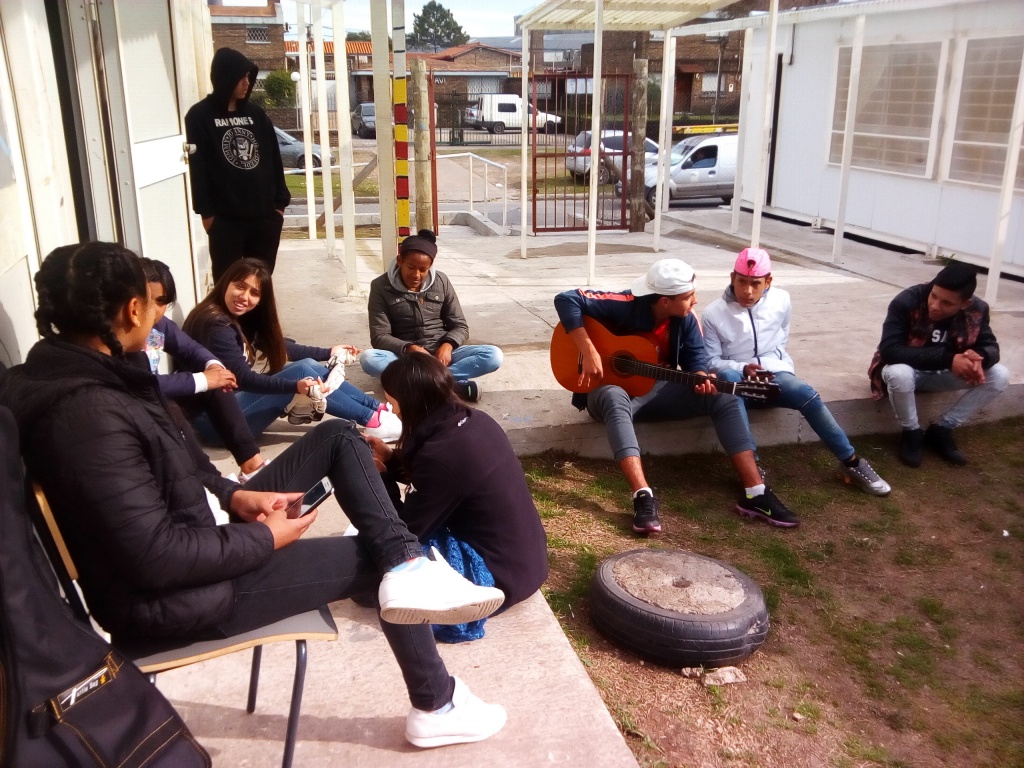 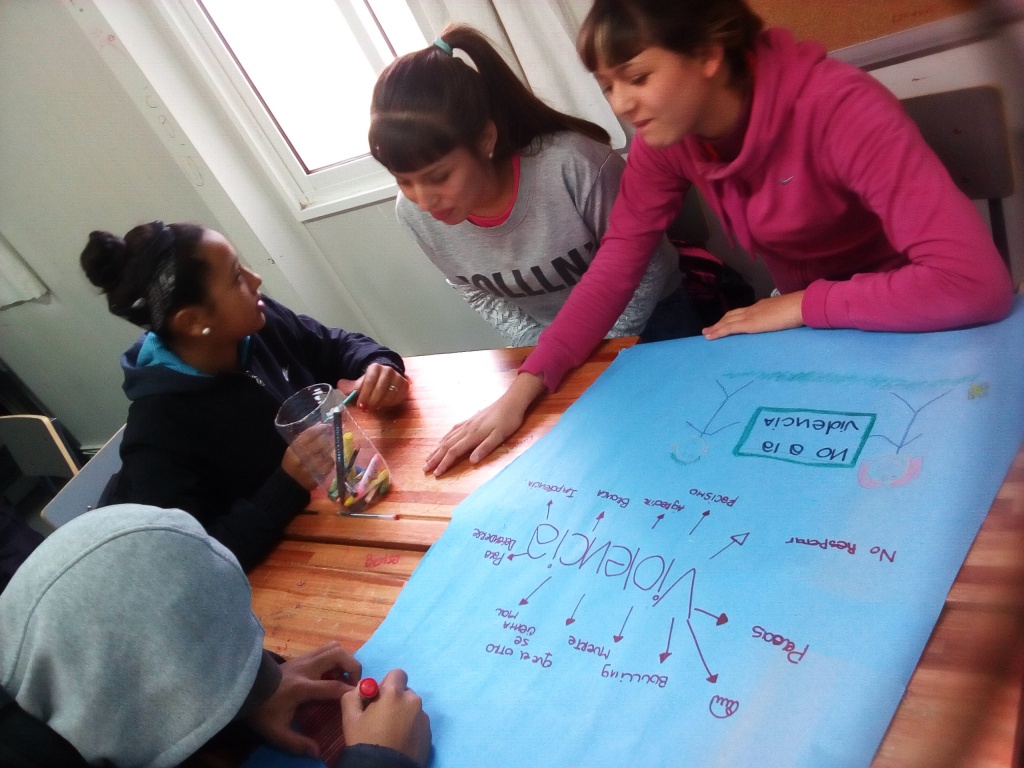 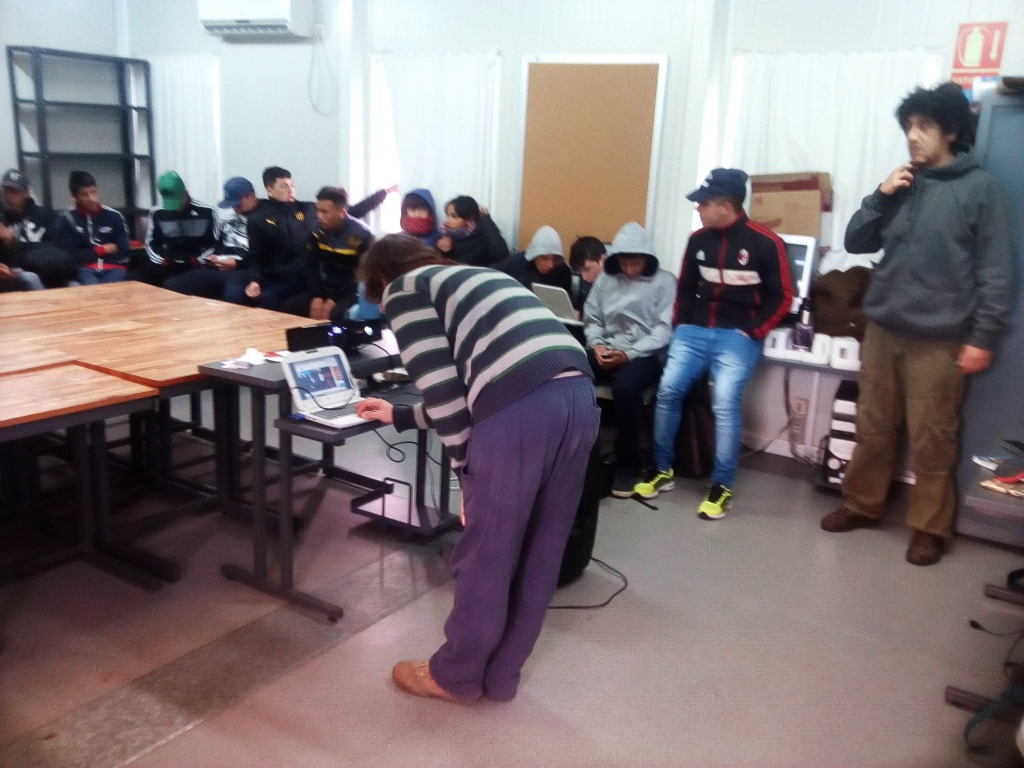 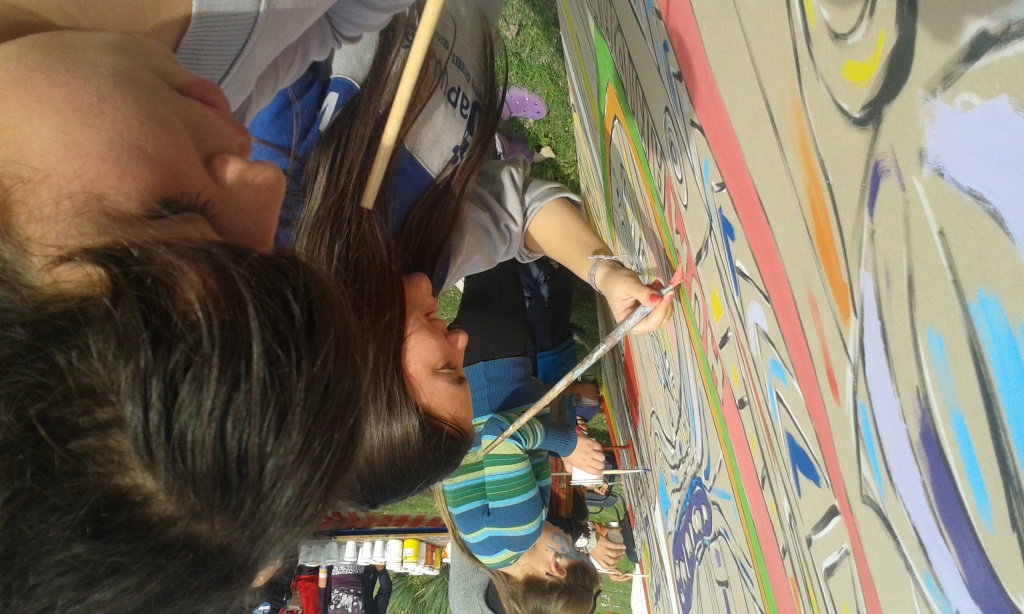 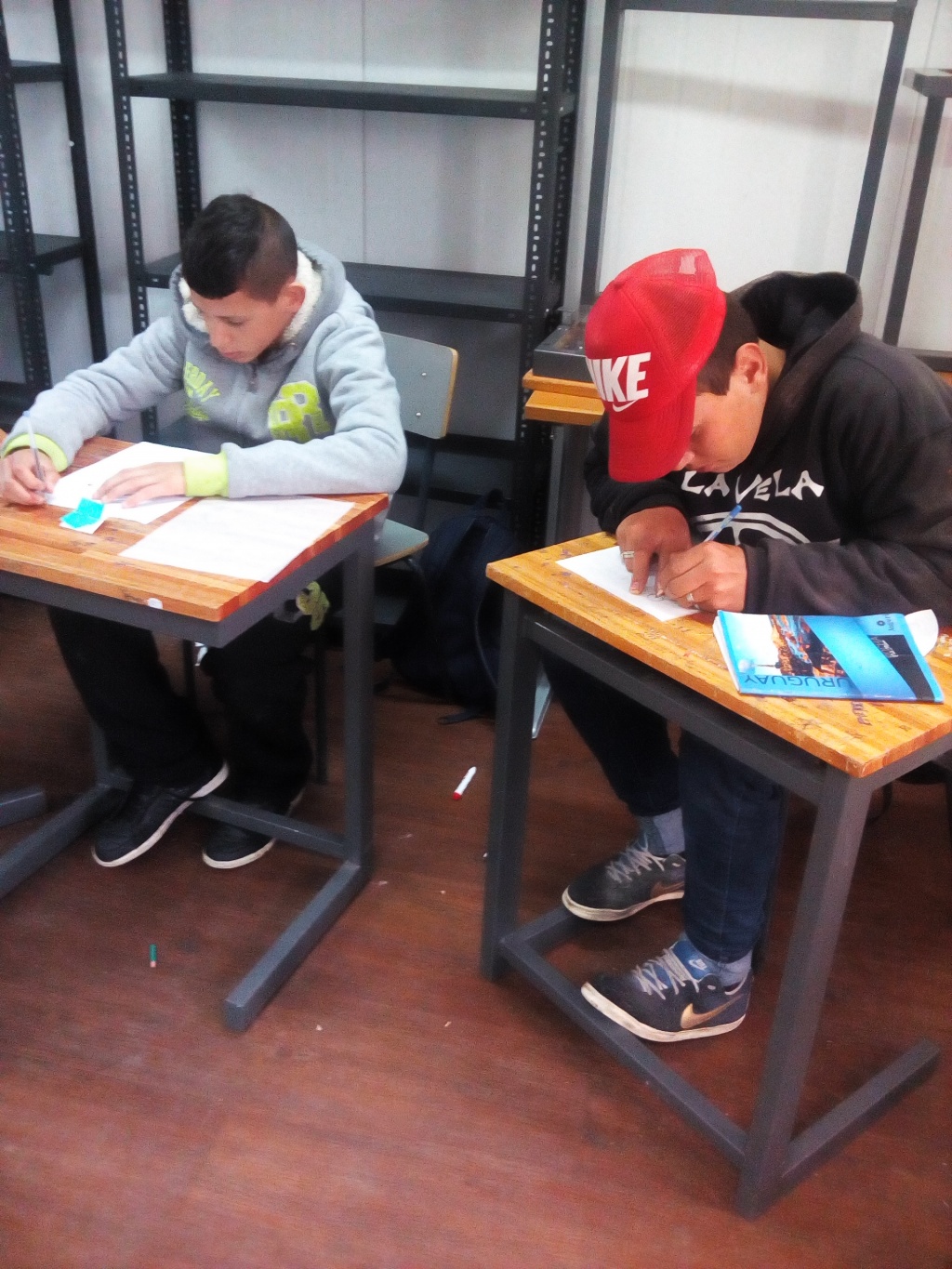 - Raise awareness and involve the entire community in order to strengthen participatory coexistence in a pedagogical way from another neighborhood space different from the classrooms.

- Motivate the group of adolescents to reconcile with a life project.
- Strengthen self-esteem by making own stories in audiovisual language
- Foster research and teamwork

The participants are cases of desertion from the formal education system, the attendance is characterized by the frustration of the young people in front of the meager academic results, the experience of discrimination, which they elaborate and express as "lack of understanding" on the part of classmates and teachers; Added to this is the lack of interest in academic proposals, expressed by students as "boredom of going to high school"; a diminished interest on the part of the families of the young people in having them complete their studies; the responsibilities that young people have to assume at home (fundamentally, caring for younger relatives) and the consequences of the situation of insecurity in the neighborhood.

The participants in the experience are children of people on the margins of society, this makes them move in a hostile environment, often of abandonment, aggression or self-injury in drugs and other vices.

They show little capacity to sustain long-term activities: the young people who participate in the workshop find it difficult to develop activities whose final results take time to be realized. That is why this year the activities that are developed are more varied and set short-term goals, which maintains the level of motivation of the participants.

Low tolerance for frustration: which leads us to develop an affective bond as close as possible, in order to support the participants in the moments when they become frustrated with the difficulties that the tasks may present.

Rather low self-esteem: this characteristic is manifested in the lack of faith that they usually have when posing a medium-level challenge, before which they are often elusive, even when they have the necessary capacities to face it. In general, they prefer not to appear on camera and it is difficult for them to be safe in front of it. From this account, it is intended to motivate and accompany them in the development of activities, highlighting each small achievement they achieve, tending to strengthen their self-esteem through the achievement of small goals.

Propensity more to consumption than to production: which we interpret as a factor present in the general culture of the generation with which we work, and which is expressed in the preference for “seeing” rather than for “producing”; or by “entering Facebook”, rather than by “producing a blog”. Given this characteristic, it has been chosen to establish a work system in which consumption (and its analysis) and creation are combined, having instances in which it is enjoyed together and together, others in which what we have enjoyed is analyzed , and others in which it occurs.

Resistance to formal settings: it is more difficult for the young participants to carry out an activity or maintain a dialogue in a formal setting than in an informal one. That is why the analysis of communicational products that are carried out are carried out in a climate of informal dialogue, assuming many times situations in which it is analyzed while looking at it. Although in some cases it may seem a bit "messy", we have found that they assume a greater commitment working in this way, than in a frame in which they look first and analyze later.

Conditions of the environment: it is known that the neighborhood where the young people live and the activities take place has high levels of poverty, social exclusion and violence, which directly affects them. This year, the level of conflict in the neighborhood has been increased by a crude confrontation between rival gangs, which has unleashed unusual levels of violence, as well as an increase in reactions from the police, all of which It affects the daily life of young people, who are not oblivious to what happens around them, but, on the contrary, are strongly affected (See Annex 1). Taking this factor into account, activities and reflections have also been proposed that allow them to elaborate their experience based on their environment, as well as provide them with tools that allow them to be aware of how they affect them emotionally.

The activities developed during this year were varied and an attempt was made to work in short modules, taking into account the characteristics of the participants who were mentioned in the previous section.

During February (first month of work), the objective of the proposal was to achieve a rapprochement with the young people of the center, sharing spaces for games and informal dialogues, thus promoting knowledge (and reunion, in some cases) and the trust of both parts. Likewise, they participated in the launch day of the Youth Center, at the El Pelícano retreat house, where the work proposal of the workshop was presented to young people. Towards the end of the month and the beginning of March, the young people who attend Nueva Vida had to formalize a commitment with the center and choose between the various proposals that were presented to them, thus conforming the list of those registered for the workshop.

The first formal meetings of the workshop took place since the beginning of March, and their objective was to agree with the participants on the topics that were of interest to them. From this account, it was agreed to work on the finalization of the edition of the video that was recorded last year and which aims to present the Youth Center, continue with analysis of audiovisual products, venture into issues related to the use and safety in the social networks, it is still undefined if this year they were going to work on the layout of a blog, a video or a recording with radio format as the central product.

During the rest of the month and part of April, the young people were trained in the use of an audiovisual editing program (Pinnacle), and it was put into practice through the editing of the material that had been recorded. Likewise, new takes were recorded that included the voice of the participants and that will be included as presentation and links to video sequences.

When it was considered that a certain level of fatigue in the group was beginning to appear in the face of the task, and given that the situation in the neighborhood was shaken by the increase in shootings between gangs and the subsequent repeated incursion of police contingents (see Annex 1), which emotionally affected young people, a work of analysis and reflection was implemented about fears, how they affect us and what ways we have to face them.

This work was implemented starting from the viewing of a feature film of the genre "terror and suspense", which was later analyzed by the young people, who were finding the management that is done, through symbols, of the levels of fear that each one and one feels. Likewise, it was possible to reflect on the psychological bases that make us feel fear in certain situations. From this reflection, the young people approached their relationship with their own fears, the ways in which they affect them and the attempts they make to face them. To end this module, a small exercise was carried out in which the participants had to create a small recorded scene that had the effect of causing a fright in whoever saw it.

The next thematic block that was addressed corresponded to a part of the month of May and was related to security in social networks. The participants had the opportunity to work directly on Facebook, identifying the weaknesses and strengths in terms of the security of the data that appeared there. Surprisingly, in general the group has a rather low level of exposure in terms of personal data dumped on the networks, but nevertheless there was an opportunity to address the case of several participants who have been harassed via Facebook by strangers who They appear under the pseudonym of a young woman (she even shows her supposed photographs) who invites them to share their privacy.

Although no one knows who the alleged girl is, several of the participants established a network relationship with her. During the workshop, it was possible to analyze the case, and conclude that it is actually some type of harassment for unknown purposes, since the profile in question shows inconsistencies and appears connected and ready to chat 24 hours a day. week, which suggests that it is a network of people trying to capture the boys with unknown intentions. From the discussion of the case, the young people who had not yet done so, cut all kinds of ties with the profile in question. The work with social networks has not yet been completed, but it was decided to change the theme for the moment, in order to streamline the workshop process in general.

From mid to late May, the video editing was resumed, working in the sound editing area. The young people were trained in the area and they tried and chose different music that would serve as the backdrop and background for the video. It was discussed about the different aesthetics and contents that the proposed themes presented and it was finally decided to include two themes that are symbolic for the participants.

During the month of June, work began on the internet preferences that young people have. For this, each one had to propose the viewing of different videos of their preference that appear on the network. Once shared, we began to analyze why they attract our attention and what the characters and content that appear in them are like, working on raising awareness of the identification processes.

At this moment, the module is still in the process of being implemented, and it will probably be worked on until the end of this month.

During this year, some goals have been achieved that it is positive to point out:

- Greater commitment to tasks, which is the result of obtaining their results in shorter periods of time.

- Greater depth in the analysis, from a less formal environment in which it is carried out.

- Likewise, some difficulties persist, and some new ones have been added, typical of the current situation. We consider that the success in confronting some of them also depends on the strategies we use to embroider the workshop:

- Some of the participants still attend sporadically, sometimes costing a common thread to the slogans.

- The mood is changeable and sometimes plans must be put aside to get closer to young people in a different way.

- The particularly unsafe situation in the neighborhood, which means that some days the participants are particularly tense and / or anxious.