Communication with the transcendent / Transdisciplinary Observatory of Religions in Recife 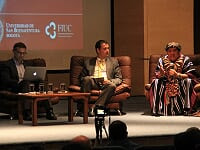 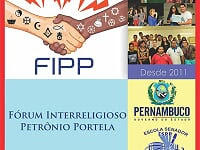 Analyze the facts related to the encounters and disagreements between religions in Recife and the region, seeking to promote intercultural and interreligious dialogue.

Foster a culture of dialogue between religions.
Promote the training and articulation of educators for Religious Education.
Experiencing different religious experiences in a perspective of dialogue and respect for the different.
Develop research on facts related to the dialogue between religions, analyzing them from the perspective of transdisciplinary instruments;
Organize network activities among researchers in line with this field of research, as well as exchanges with other Observatories;
Generate a series of electronic publications and a virtual documentation center on the religions of Recife and their meetings / disagreements;
Promote and support experiences and events of intercultural and interreligious dialogue at UNICAP;
Collect and disseminate the academic and audiovisual production of the University, about religions, religiosity and dialogue;
To welcome and advise students and researchers willing to initiate transdisciplinarity applied to the religious fact.

JustificationThis Observatory is a university extension activity, linked to the Postgraduate Program in Religious Sciences at the Catholic University of Pernambuco, UNICAP, and, precisely, to the Interreligious Dialogues Line, of the Religions, Identities and Dialogues Research Group. This Line intends to develop research on facts related to the dialogue between religions, analyzing them from a transdisciplinary and plurimetodological, non-denominational and academic approach. Special emphasis is given to the study of the processes of (inter or trans) religious education in Brazilian pluralist culture, involving religious education
Description of the environment

The Transdisciplinary Observatory of Religions of Recife is hosted on the website of the Catholic University of Pernambuco, UNICAP, located in the Northeast Region of Brazil, a region marked by cultural and religious diversity.

UNICAP's Trinitarian catholicity opens us to an ecumenical and pluralist vision: it houses professors, students and employees who find, within, space for the free expression of their beliefs, which are mutually respected. UNICAP is a university with a Jesuit tradition, with a humanistic perspective. It is in the pursuit of this humanism that it is part of the broad picture of the mission of the Society of Jesus, today formulated as “the service of faith and the promotion of justice”, a service that encompasses dialogue with society in general in order to respond to challenges presented by the current political-economic system.

This form of knowledge is followed by another equally important aspect, which is the transformation of society. Being an agent of social transformation means that we are called, today, to exercise a new type of prophetism, generating alternatives for the great current challenges, among them the need for dialogue between religions and respect for the diversity of beliefs. We also know that all transformation takes place locally, however, we emphasize our universal dimension, which finds, in Ignatian tradition, a proven source of inspiration. It is part of the tradition of the Society of Jesus to start from the context in which people and works are inserted, whether at the pedagogical, cultural and spiritual levels, to recognize the calls of God's action.

For this reason, Unicap, located in the Northeast, is focused on its socio-anthropological context, its multicultural and religious wealth, its human values, the challenges of its social dynamism and the economic problems of its people.

The Northeast is known for great economic inequalities that hinder the access of the low-income population to social and cultural goods. It is a region also known for its affectionate, cheerful, welcoming, courageous and strong people. The University wants to foster and express these values and share them with other universities, peoples and nations.

The Transdisciplinary Observatory of Religions in Recife is a virtual space of academic extension, created by the research team of Professor Gilbraz Aragão, within the portal of the Catholic University of Pernambuco, UNICAP, with the aim of analyzing the facts related to the meetings and mismatches between religions in Recife and the region, seeking to promote intercultural and interreligious dialogue.

This virtual space is part of other initiatives of the Observatory project, namely: the Study Group on Trandisciplinarity and Dialogue between Cultures and Religions, with weekly meetings; the Events that seek to foster dialogue, among them the Peripatéia of Religions, with semiannual editions, and the Sessions of the WG “Contemporary Spiritualities, Religious Plurality and Dialogue”, which take place at the SOTER, ANPTECRE Congresses and at the International Symposium on Theology and Religious Sciences at our University, which is triennial; and, finally, the Inter-Religious Forum of UNICAP, which gathers the religious leaders of the region every month for a mystical listening to the different faith traditions.

The Inter-Religious Forum of UNICAP, organized by the Observatory since 2007, articulates a series of meetings of animators of the religious traditions of the region, for mutual knowledge and exercise of cultural tolerance, for the attempt of a pluralistic veneration for the sacred. After a phase of (re) knowledge of almost thirty religious groups most present in Pernambuco, the Forum began to work on issues transversal to spiritual traditions, such as “Religiosity and education in schools”, “Sacrifice and religious comparisons”, “Post-times modern, post-religious spaces ?! ”,“ Comparative religious devotions ”.

For each section of the Interfaith Forum, a documentary about the religion will be produced. The video is directed by the religious images researcher and video director, professor Luca Pacheco. The documentary is shown at the beginning of each Forum in order to provide participants with the opportunity to experience the spiritual experience of that religious group through their senses. To date, 30 documentaries have been produced. In addition to the documentaries, the site provides articles, master's dissertations and teaching material.

All this material is available on the Observatory's website and has been used by researchers of the religious phenomenon and by teachers of religious education. The project aims to establish partnerships with the education departments and other civil entities for the production of a kit containing documentaries, didactic material and pedagogical guidelines for the use of this material in religious education. In addition to the forum, training courses are offered for teachers of Religious Education.

- Integration of areas of educomunicacional intervention

The Observatory is inserted in the areas of educomunicational intervention of technological mediation and communication with the transcendent. Through the portal, multimedia material is made available both for the training of educators and for pedagogical practice, with emphasis on the documentaries of the Interreligious Forum. The exhibition of these documentaries in the face-to-face sections of the Interreligious Forum aims to create an educative communicative ecosystem that allows them to live the spiritual experience of the religious tradition portrayed. This takes place in a sensitive and symbolic way to later be reflected, thematized and deepened.

The Transdisciplinary Observatory of Religions in Recife is a virtual space for the promotion of intercultural and interreligious dialogue organized in a collective effort. It has the participation of many colleagues and researchers from the Catholic University of Pernambuco, as well as research friends of religiosity and dialogue between cultures and religions around the world, including in collaboration with the “Observatory of religious diversity and cultures in Latin America. y el Caribe "and in conjunction with the" Spiritual Plurality and Interreligious Dialogue "(coordinated, in addition to Prof. Gilbraz Aragão of UNICAP, by Profs. Roberlei Panasiewicz - PUCMinas and Cláudio Ribeiro - UMESP).

In terms of an inspiring partnership, we are proud to count recently on the coexistence of monk Marcelo Barros, returning to Recife after years of advising popular pastorals and working for the unity of spiritual traditions. In the virtual space it is structured in side columns in which we share reflections of blogs of the members of our team and videos produced by our Interfaith Forum; On the Home page you will find news about spiritual traditions and their (dis) encounters in the region; In the Team tab we present those responsible for this website and for the research project that feeds it;

In Research you can access reflections and dissertations on interreligious dialogue developed by our group; Debates is the section that seeks to deepen the most controversial topics and news about religions in our context; At the Forum, we provide educational resources, together with information and audiovisuals about the spiritual traditions that participate in our interfaith meetings;

Calendars is a project to build an interreligious calendar inculturated in the regional context, as a service to educators of religious diversity, about our festivals and beliefs; In Publications you have electronic texts from the magazines that we organized on ecumenism and dialogue, as well as conference proceedings where our group participated;

In the Studies section we explain the research dynamics of our Study Group at UNICAP, on Transdisciplinarity and Dialogue between Cultures and Religions, in addition to updating the semiannual schedule of our activities; In Tribute, we present testimonies from personalities from Recife and the region who have been seeking dialogue, starting with Dom Helder Câmara;

In Espaço, we share our commitment to a broader dream of building a foundation, the “Space / Museum of Religions of Pernambuco”, with the aim of promoting (re) knowledge of religious traditions and coexistence among followers of the various spiritual paths ; In Contacts you discover our physical and virtual addresses; Links provide links to our partner groups, study programs and research publications in the field of religious studies.

It contributes to interreligious dialogue, respect for the different, the experience of community experiences welcoming diversity, the relationship between academic knowledge and culture, the formation of educators committed to the formation of human beings in a plural society.
The virtual space provides communication and the creation of interreligious interaction networks, in addition to providing multimedia pedagogical subsidies for teacher training and pedagogical practice;
The video documentaries on religions bring to the interlocutors the spiritual ambience of each religious tradition, creating an educative ecosystem that enhances the experience.
The technological convergence that takes place in the virtual space contributes to the transdisciplinarity of knowledge that permeates the entire educative and communicative experience of the Observatory.
The Trinitarian perspective of Unicap's Catholic identity gives the Observatory of Religions its character of promoting respectful dialogue between the various religious denominations, aiming at common growth and the formation of individuals aware of their social role.
Dynamics of knowledge production in the field of Religious Sciences aiming at the creation of the Observatory's virtual space;
Creation of a network of researchers and educators prepared for contemporary religious education.
The organizing team of the Observatory of Religions meets regularly to evaluate the process, study, socialize research, prepare multimedia materials for the virtual space, prepare courses, conferences, academic and cultural activities.
The team is formed by researchers and professionals from different areas of knowledge, such as anthropologists, sociologists, communicologists, pedagogues, educomunicologists, theologians, biblical scholars and religious scientists, providing the convergence and transversality of experiences and knowledge.